Holding a water bottle, dancer Private Freeman walks casually across the studio floor and puts his bottle down upstage center. He then circles around, one hand seemingly feeling the air, before trying out a few steps, stopping pensively, and rubbing one foot against the floor, possibly testing its texture. 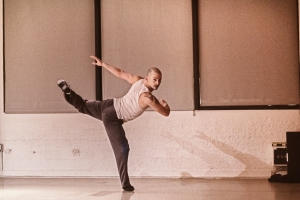 Rehearsal for Going Solo, KT Nelson’s piece premiering at YBCA this week, has started and the first section of the work, introspect and less choreographically set, hints at the making process that happens off stage, in the studio. Embodying the thin line that exists between process and performance, this introduction also points to other porous boundaries. At time playful and exuberant, at other times more somber and mature, Freeman lets boyhood and manhood converse seamlessly, thanks to the deeply attuned range of physicality that he has built and nurtured over the past 20 years he has been dancing.

After rehearsal, I talked to Nelson and Freeman about the piece. Below are excerpts from our conversation.

Marie Tollon: KT, You have choreographed solos for dancers within group pieces before, but this is your first time choreographing a solo piece. Can you talk about your process?

KT Nelson: Making a solo is maybe the most difficult thing for me. One of my gifts as a choreographer is to balance one thing against another. A choreographer who has a talent for narrative would probably have an easier time with a solo, just because they are following an idea through from beginning to end. I’m usually following an image through which is much less linear and easier to manifest in a group. The other hard thing about solos is that there is only one body. In group works, the relationships you develop are offset by another body, or a line of bodies. I’m trying to develop [Private’s] relationships in other ways.

KN: I have been using the imagery of a sailboat, at times an actual paper sailboat my sister and I made with discarded paper items. And I’m using water sound effects. Both of these function as props in a way.  They have been useful in establishing an interior landscape. I am not sure they will still be in the piece in the end. But they have been very helpful in the process.

MT: Private, does performing a solo piece require a different set of tools, or maybe a different kind listening, than dancing in a group piece?

Private Freeman: I would say it involves a different kind of release. When you are in a full company work, you may have a solo within that [piece.] I have always approached solos pretty much the same way. Yes, I fit into part of an ensemble, but knowing the context of what we are doing, I have always felt a freedom within that solo, that I could interpret it more freely on a performance to performance basis and let it grow even more. A whole solo isn’t any less or more challenging, it is a broader scope of what I sometimes get to do on a smaller scale.

This is especially true with KT, because she allows you to improvise a lot and trusts that you’ll make decisions that are appropriate to the context. It is also a one-on-one conversation with a choreographer as opposed to a group conversation. One-on-one, especially with KT, you know you are on the same page and are talking the same language. You don’t have multiple interpretations. It stays in this little world which is enjoyable because you immerse yourself more.

MT: KT, what other images are you working with, if any? 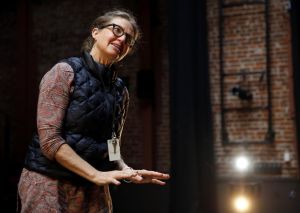 KN: I definitely had an operating image, which is now different from what I thought it was going to be. I originally had an idea that was related to my environmental concern: the human in relationship to nature, the pedestrian versus the animal, and the question of whether the natural world is in us. But when we were working on the Velveteen Rabbit, I was sitting in the theater with my sister and she said to me: “Who is the crocodile? They are so playful!” It was Private and in that moment I realized my working image for the solo wasn’t the right one. He has a physicality that slips from man to boy with such seamlessness.  At that point my overriding image became the melding of a man and a boy, and how those qualities can be deeply connected and not separate. The question of “Who are we really?” is also in there.

MT: There was a bit of the conversation between boy and man in Cut-Out Guy as well.

KN: Yes, I found myself revisiting Cut-Out Guy and trying not to. I think Private -who wasn’t in Cut-Out-Guy– and I worked through that after the first week.

MT: At one point in rehearsal, you said to Private: “In this movement, there’s a bit of you and a bit of me.” How would you characterize each other’s vocabulary?

KN: I really don’t dance anymore. Private’s first year dancing in the company was my last. So we actually once danced together. One thing Private and I do share is a love of momentum – identifying the energetic quality of a movement and setting it free- and the inability to stop moving!

MT: Private, you danced with ODC for 12 years, took a 7-year hiatus, and now are back. What are ODC’s specificities that you held on to these past few years?

PF: One thing I learned that is always maintained at ODC is a sense of true collaboration on the dancers’ level. It’s a collaboration in the trenches [that involves] digging deeper and one-on-one or group conversations. In a lot of companies, there is no conversation, you come in and you’re told what to do.

One of the things that I loved about ODC the first time I ever saw them, which was before I was offered a contract to work with them, was the ensemble moments because I saw every personality out there. I didn’t grow up dancing and learned from a small age to be exact and be exactly the same as everybody else. I started to dance late because there was freedom and expression in dance. It was about sharing ideas, creating something really amazing to present in front of people. It’s as simple as that.

MT: What did you learn from your “artistic walkabout?”

PF: I have learned to better understand the psychology of different groups of people. There are companies where everyone is on board with whatever mentality the director sets forth and some companies where they don’t. I learned how to incorporate all these psychologies and personalities, how to work with them better, and how to make myself better to work with as well.

One thought on “Porous Boundaries | By Marie Tollon”